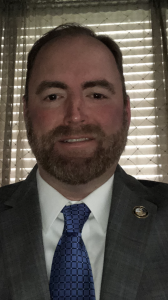 Matthew Joel Wood Communications Workers of America President, Local 3411 Brother Wood became a union member on June 21, 1999 when he began his career with Bellsouth and over the last 22 years he has served as a Job Steward, Local Vice-President, and President. He has put his passion and focus into the CWA Legislative/Political Program to broaden CWA’s presence in the Louisiana Legislature. As the Local President, Brother Wood’s responsibilities include managing the local day to day business. He is also the Louisiana State Legislative/Political Coordinator and serves as the spokesman and lobbyist for the Communications Workers of America at the Louisiana State Capitol. As an employee of Bellsouth and now AT&T, Brother Wood was a Service Technician installing and maintaining a wide range of voice and data services. As a Service Technician and now currently a Facility Technician, Brother Wood maintains these services across a broad network made up of DSL, fiber and copper cables. As a CWA member and activist, Brother Wood’s vision is to invest in next-generation networks that include real fiber broadband expansions which include investing in good, highly skilled union jobs across the Southeast of the United States. The goal is to make broadband more accessible to every community, rural and urban. During the COVID Pandemic it became apparent that affordable broadband for everyone is not up to a reasonable standard. Connectivity for business and industry, along with public and private school systems sounds like a priority, but it was the consumers inside of their homes that suffered during the pandemic. Brother Wood will make CWA’s voice heard when it pertains to public resources funding private (ISP) networks. This must include oversight and ensure everyone has adequate phone and internet service.