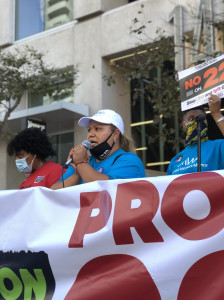 Luz Laguna is an Uber Eats driver and a leader in Mobile Workers Alliance, an advocacy organization for app-based drivers. Luz has driven for Uber and Lyft for over three years, and like so many in the gig economy, has been forced to continue working throughout the pandemic to make ends meet. She has organized and spoken out against Prop 22 -- the $225 million ballot initiative bankrolled by Uber and Lyft to exclude gig drivers from basic worker protections and benefits – as well as continuing to expose gig companies’ unfair and illegal treatment of their drivers. In addition to being a leader in the fight for gig workers’ rights, Luz is the proud mother of four. She lives in Los Angeles, California.