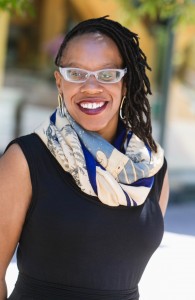 Lateefah Simon is the President of Akonadi Foundation, which nurtures movement building to advance racial justice in Oakland. A nationally recognized advocate for civil rights and racial justice, Lateefah brings over 20 years of executive experience advancing opportunities for communities of color and low-income communities in the Bay Area. Prior to joining Akonadi, she served as Program Director for the San Francisco-based Rosenberg Foundation; there, she led the launch of the Leading Edge Fund to seed, incubate and accelerate bold ideas from the next generation of progressive movement leaders in California. Lateefah previously served as Executive Director of the Lawyers’ Committee for Civil Rights of the San Francisco Bay Area, where she revamped the 40-year-old organization’s structure and launched successful community-based initiatives, including the Second Chance Legal Services Clinic. Lateefah’s advocacy for juvenile and criminal justice reform, with a particular focus on young women and girls, began at the Center for Young Women’s Development (CYWD) in San Francisco, now called the Young Women’s Freedom Center.. At age 19, Lateefah stepped into the role of Executive Director for 11 years. In 2016 Lateefah was elected to serve District 7 on the Bart Board of Directors, and was appointed by the Governor of California to the California State University’s Board of Trustees. She has received numerous awards for her work, including the MacArthur “Genius” Fellowship, the Chronicle of Philanthropy’s 40 Under 40, and the Jefferson Award for extraordinary public service. Her articles have been published in the Chronicle of Philanthropy, the San Francisco Chronicle, Time Magazine, The Guardian and more.