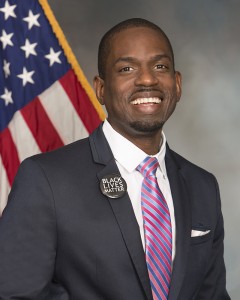 The first #BlackLivesMatter organizer elected to public office in the country, Councilman khalid is leading a generation of young activists from protests to politics. This #Fightfor15 organizer & Bernie Sanders Delegate is part of the inaugural City Council of South Fulton, GA, which is poised to become the largest progressive city in the South. ​khalid is a lifelong community activist. His name, lower-cased in the Yoruba African tradition, emphasizes the community over the individual and literally means "eternal quiet warrior." An activist with prophetic vision to pursue progressive policies ' in the streets & the suites,' khalid enrolled and graduated from Fulton County Citizens University, while being an active member of Atlanta Neighborhood Planning Units (NPUs) V (Mechanichsville), where he organized a neighborhood watch program; and NPUs P (Camp Creek) & L (Vine City), where he participated in Economic Development negotiations around the new Mercedes-Benz arena. ​ khalid helped organize the Atlanta chapter of #BlackLivesMatter and served as a Field Organizer for the Georgia House Democratic Caucus. In 2016, he was elected as an At-Large Delegate to the Democratic National Convention. A college-educated, community activist with a career in nonprofit management and experience in blue-collar jobs, Councilman khalid uses his unique blend of professionalism, compassion & working class struggle to ensure the new city of South Fulton, Georgia builds a table big enough for everyone to have a seat at it.