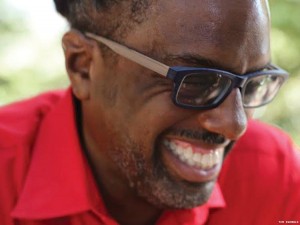 Khafre Kujichagulia Abif, MLS is an Atlanta-based AIDS & Bisexual activist, writer, editor, blogger and artist who has been thriving with HIV for 28 years. After High School, Khafre enrolled at Florida Agricultural and Mechanical University (FAMU) where he obtained 90 credits. He returned to Pittsburgh to complete his Bachelor of Arts degree in Africana Studies from the University of Pittsburgh, and then earned a Master of Science degree in Library Science specializing in children and youth services, from the Graduate School of Information Sciences at the University of Pittsburgh. Khafre now serves as a Community Organizer with the Southern AIDS Coalition, a Birmingham, Alabama based resource and advocacy organization. He will work on a campaign to connect HIV-positive folks in the South with Southern AIDS Coalition and other advocacy networks. “We must grow a broader coalition of people living with HIV and provide them with the tools to successfully advocate for policy change,” Abif said in a press release announcing the appointment. Khafre has been honored the be selected as HIV Plus magazine one of 75 Most Amazing People Living with HIV in 2016 and by POZ magazine as one of The 2015 POZ 100: Celebrating Long-Term Survivors. Khafre was among the Bisexuals at The White House in October 2015. Khafre has been appointed as a member of the Georgia State Advisory Committee (SAC), to the United States Office of Civil Rights, representing the State of Georgia. His appointment, announced on June 1, 2016, was approved by the Commissioners of the United States Office of Civil Rights in Washington, D.C. Khafre is also the Founder and Executive Director of Cycle for Freedom. This innovative project is a national mobilizing campaign founded in 2010 to reduce the spread of HIV among African Americans and Latino’s by confronting the three critical issues that fuel the HIV pandemic: attacking HIV-related stigma, homophobia, and lack of education Khafre is the former Director of the Langston Hughes Library, and worked for the Children’s Defense Fund at the former Alex Haley Farm, in Clinton, Tennessee, where he planned developed, coordinated and facilitated, the Children’s Defense Fund’s Langston Hughes Children’s Literature Festival, the Walter Dean Myers Institute for Publishing. Khafre is one of the first men of color to serve as manager of children’s services for a major urban public library system when he began as Manager of Children’s Services, at the Brooklyn Public Library, in New York City where he implemented a Library Early Enrichment Program (LEEP), implemented a system-wide Volunteer Service program, and served as the Project Director for their Project Expedition website. Khafre has been involved in many other community projects including his service as Project Director of the Healthy Black Family Project at the University of Pittsburgh, and lots of work nationally with HIV/AIDS prevention and education efforts. Khafre has several publications to his credit, Khafre is the editor of the anthology, “Cornbread, Fish and Collard Greens: Prayers, Poems & Affirmations for People Living with HIV/AIDS”, a 2013 publication from AuthorHouse. Khafre has two forth-coming works this year, Sistah’s Speak an anthology of (voices of HIV positive women) a collection of short fiction, poetry, creative nonfiction, personal narratives, critical essays and visual art from women living with HIV/AIDS and Raising Kazembe: A Memoir This collection of journal letter written by an HIV positive father to his son. It chronicles the lesson of life and education, the mental and emotional health of a father who deals with isolation, stigma, bisexual erasure, as well as how the traumas of his childhood play out in his parenting and his desire to heal.