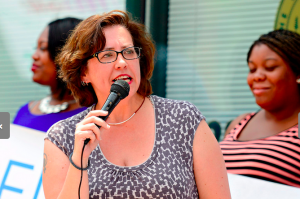 Kati Sipp is the Principal of New Working Majority, a consulting firm. She is also the editor of the blog Hack the Union, which focuses on the intersections of work, organizing and technology. Prior to her work with NWM, she served as the Managing Director for the National Guestworkers Alliance. She founded the Pennsylvania affiliate of the Working Families Party, and spent nine years working for SEIU Healthcare Pennsylvania, serving as the statewide Political Director and Executive Vice President of the local. Kati began working with SEIU in California in 1997, where she was an internal organizer, working with classified school employees. She left California in 1999 to move back to the East Coast, and worked for the Philadelphia Unemployment Project, where she organized mothers who were affected by changes in the state’s welfare policy. After leaving PUP, she spent time as the director of the Jobs with Justice affiliate in Philadelphia, before going back to SEIU. Kati is the proud mother of Alina and Isaac. She holds a Bachelor of Fine Arts degree from Mason Gross School of the Arts, Rutgers University.