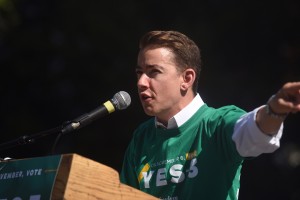 Kasey Suffredini (he/his/him) is a nationally recognized campaign strategist with 20 years of experience in campaign management, policy development, strategic communications, and grassroots mobilization. Kasey has a track record of designing campaigns that change narratives, pass legislation, win ballot measures, and drive momentum on seemingly intractable issues. Kasey’s campaign leadership has resulted in over 100 policy reforms in nearly every U.S. state and at the federal level, including a number of national firsts. These include leading the first statewide popular vote on transgender rights in U.S. history to victory by a landslide two-thirds margin (68-32%), partnering with the White House and federal Departments of Labor, State, and Education to make Family and Medical Leave, U.S. Passport and FAFSA programs inclusive of same-sex couples, winning legislation to create the nation’s first statewide commissions on youth homelessness and LGBTQ aging, and passing comprehensive statewide transgender nondiscrimination protections for the first time in a Republican-controlled state. Since launching Telos Strategies in 2015, Kasey has partnered with public school advocates, immigration reform leaders, social justice foundations, and universities to advise on coalition building, ballot and public education campaign development, business organizing, and bipartisan consensus building. He is also President of Strategy at Freedom for All Americans, the national campaign to win LGBTQ nondiscrimination protections nationwide. Kasey is a sought after speaker and trainer on lessons from LGBTQ movement advocacy and their applicability to other social justice issues, and he is frequently quoted in TV, radio, podcast, and print outlets on political trends and LGBTQ issues. He has been honored for his advocacy by the New Leaders Council, the American Civil Liberties Union, Harvard Law School, and the National LGBT Bar Association. Kasey received a B.A. from the University of California at Berkeley and a J.D. from Boston College Law School. After two decades up and down the East Coast, he now resides in Southern California with his fiance ́, Kristina Bigdeli, and their pug, Tini.