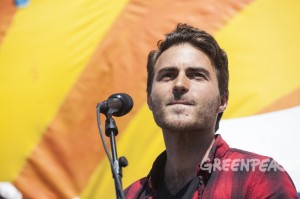 Kai Newkirk is a progressive social movement organizer. He co-founded 99Rise and, as the mission director of Democracy Spring, was the architect of the largest American civil disobedience action of this century. In 2014, Kai disrupted the US Supreme Court to protest it’s role in political corruption in an action captured in the first-ever video recording of the Court’s chamber. He led 99Rise’s 480-mile, 37 day California March for Democracy and the subsequent 12 days of state capitol sit-ins that helped pass two democracy reform bills. Before devoting himself to the democracy struggle, Kai worked as a political aide and as a worker organizer. He has organized nonviolent action campaigns in the universal health care, immigrant rights, anti-war, and global justice movements. Kai is a founding member of the Momentum organizing tradition and an experimenter in the emerging field of integral movement ecology.