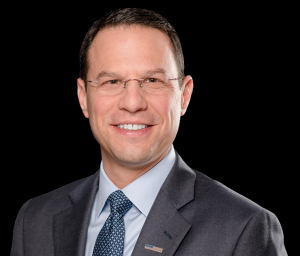 Shapiro has made a career winning tough elections and turning historically Republican offices into Democratic strongholds with his nationally acclaimed record as a pragmatic, progressive leader. As a first-time candidate in 2004, Josh knocked on 18,000 doors and won a State House seat in the Philadelphia suburbs by beating a heavily-favored former Member of Congress in a Republican district. He wrote and passed far-reaching ethics laws and Philadelphia Magazine named him State Legislator of the year, writing “Josh has been a blast of oxygen in the smoke choked back rooms of quid-pro-quo Harrisburg.” After years of work, the district now has a Democratic registration advantage and is safely in Democratic hands. In 2011, Josh led Democrats to victory for the first time in 150 years in the former Republican stronghold of Montgomery County, a crucial battleground and the third- largest county in Pennsylvania. As Chairman, Josh fought against a discriminatory Voter ID law, helped the first LGBT couples in Pennsylvania marry, and passed a responsible contract while balancing the budget after years of deficits. After securing the Democratic nomination in a competitive primary, Josh was elected Pennsylvania Attorney General in 2016. Despite Republican wins at the President and Senate level, Josh defeated his opponent by making gains outside of Philadelphia and Pittsburgh’s Democratic strongholds. He was sworn in as only the 2nd elected Democrat to hold the statewide office in January 2017. As Attorney General, Josh has been an independent fighter focused on upholding the rule of law and protecting people’s rights. His Office published a Grand Jury report into child sexual abuse in the Catholic Church, identifying 301 predators and thousands of victims and spurring investigation across the United States. He has twice secured national injunctions protecting women’s access to no-cost contraception as required by the Affordable Care Act. His Office is fighting our country’s opioid epidemic on every front– including leading a multistate investigation into pharmaceutical manufacturers and distributors.