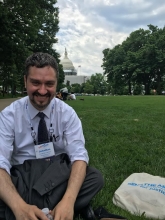 Jonathan Lipman is the Chief Strategy Officer for Bend the Arc, where he oversees all of the direct impact work of the organization through advocacy, communication and organizing. Jonathan has nearly two decades of experience in the political arena. Prior to joining Bend the Arc’s staff, he was a key strategic adviser to the organization while serving as a Vice President at the political strategy and communications firm BerlinRosen. While there he led campaigns, strategic planning, and rapid-response for several national organizations, including Bend the Arc, the Knight Foundation, Physicians for Reproductive Health, Boston Community Capital, American Jewish World Service, and the Central Conference of American Rabbis. Jonathan came to BerlinRosen after five years in senior staff roles on Capitol Hill in Washington, helping Democratic members in both the U.S. House and U.S. Senate with strategy and message during the battles over Obamacare, TARP, Wall Street reform, economic stimulus, and Planned Parenthood defunding. Prior to that he was a political and investigative reporter in Chicago, covering Chicago City Hall and Cook County. Jonathan lives in Philadelphia with his wife and their two children, where they are active members of the social justice community.