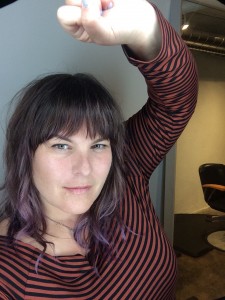 Jessica Tully is an award-winning artist and organizer working primarily in video and participatory practices. Her site-specific rock operas, civic engagement campaigns, and performance videos have taken place on the Bay Bridge, underwater, at State Capitols, major unionized museums and cultural institutions, and in the ballot box.   Jessica is a lead organizer of the newly formed #WTF: Win The Future - a virtual political party movement within the Democratic Party. #WTF's goal is to help Dems win elections and bring the political process into the 21st Century by incorporating crowdsourcing which scales to millions of people. She has worked in nine presidential elections, officially starting with visibility during the balloon drop at the 1984 DNC. Over the past 20 years, she has served as an artist, curator, and cultural engagement producer for many of today's leading progressive organizations, unions, candidates, and recording artists. They include: Planned Parenthood Federation of America, Movement Voter Project, the AFL-CIO, Air Traffic Control (now Revolutions Per Minute), SEIU-ULTCW, Jamie Oliver Food Revolution, Rock the Vote, Saatchi & Saatchi S, Take Our Daughters To Work Day, Youth Speaks, the Sierra Club, Free Range Studios, Music for America, Okayplayer, the Clinton/Gore campaign, Absinthe Films, and for multiple recording artists, festival tours, and benefit concerts. They include: The Roots, The Beastie Boys, Pearl Jam, Erykah Badu, Alanis Morissette, Rolling Thunder Downhome Democracy Tour, We the Planet, Bring Mumia Home, among others. Along with Heather Thomas and Dan Carol, Jessica is the co-founder and host of the L.A. Cafe and maintains a professional art and engagement practice based in Oakland and Los Angeles. Her limited edition multiple, The Cell Phone Sleeping Bag, was acquired by The Jewish Museum in NYC for the contemporary Judaica permanent collection and featured in the New York Times, on Comedy Central and each year for Reboot's National Day of Unplugging.