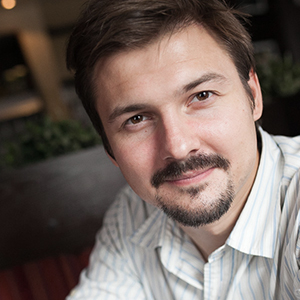 Ivan Pritulyak is a producer, radio host, actor, and journalist who works at Radio Siberia, in the city of Omsk. During the Russian Presidential election in 2012, Ivan trained volunteers to monitor the election and discussed cases of electoral fraud on the air . In the beginning of the recent unrest in Ukraine, Ivan conducted an unusual social media survey. He used his last name, Pritulyak, a common Ukrainian name to establish connections with other people with the same name who live in Ukraine, and asked them what they thought about the situation. The results of his survey, first published in his blog, were re-posted by major news agencies in Omsk. In his free time, Ivan also organizes charity concerts and performances to help children with special needs.