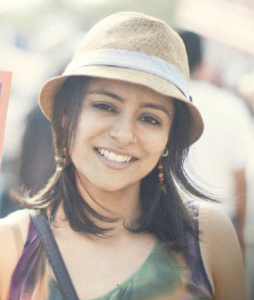 Ishita Srivastava is a producer, filmmaker, and culture change enthusiast. As multimedia producer at Breathrough, she headed up their multimedia campaigns about immigrant women’s rights, #ImHere, Restore Fairness, and Deport the Statue. She has directed and produced numerous videos and animations, for those campaigns and other Breakthrough projects. Born and raised in New Delhi, she holds a BA in English literature from St. Stephens College (Delhi), a BA in media and communications from Goldsmiths College (London), and an MA in cinema studies and culture and media from NYU’s Tisch School of the Arts. Her own documentary film, Desigirls, examines the intersection of gender, sexuality and immigrant culture as it follows two women as they negotiate their varied and often fraught experiences as queer Indian women in New York City. Ishita, famously, does not like sweets.