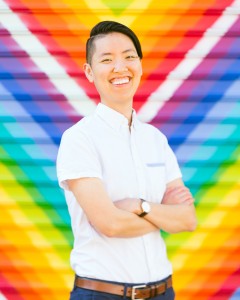 Iimay (she/her, they/them) joined the Resource Generation staff as Associate Director in August 2014 and became the Executive Director in January of 2017. She grew up in an upper class immigrant family in Cary, NC and was thrilled to get involved in the Resource Generation DC chapter in 2013 so she could finally work through the contradictions of being a young person of color with wealth. She holds a vision for collective liberation in her heart and is passionate about creating and implementing strong organizational systems to turn her vision into reality. Prior to Resource Generation, she spent 3 years as the Director of Operations and Finance at The Management Center where she helped move the organization to the next level of performance. Born and raised in North Carolina, Iimay was politicized through interning with Southerners on New Ground (SONG), which builds, sustains, and connects a Southern regional base of LGBTQ people in order to transform the region. She moved to the Washington, DC area in 2008 to work for OCA (Organization of Chinese Americans) where she led programming for student leadership development. Iimay is an active member of the DC queer Asian American community and helped organize the Rainbow Dragon Fund, the region’s first grassroots queer Asian American giving circle. Iimay is currently the Co-Chair of the board of the Astraea Lesbian Foundation for Justice.