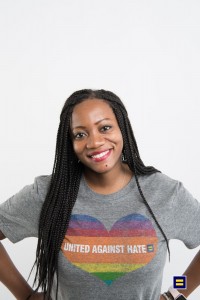 Ianthe Metzger is the Press Secretary (State & Local) for the Human Rights Campaign (HRC), where she focuses on six priority states for HRC Rising -- HRC's proactive grassroots campaign to fight anti-LGBTQ legislation and elect pro-equality candidates in 2018, 2020 and beyond. She’s also worked to change hearts and minds on issues like nationwide marriage equality, non-discrimination protections and various public education campaigns. Prior to HRC, Ianthe was a Senior Account Executive in BerlinRosen Public Affairs' issue advocacy practice, focusing on progressive issues, including juvenile justice reform, energy and the environment, health care, and economic opportunity. She's also worked on the communications teams of AFL-CIO, and its community affiliate Working America.Ianthe received her undergraduate degree from Georgetown University and Masters in Strategic Public Relations from George Washington University. She is originally from Trinidad and Tobago, but currently lives in Washington DC.