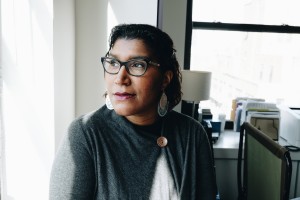 Ginna Green joined Bend the Arc: Jewish Action in July 2018 as Chief Strategy Officer. In this role she oversees the work of the advocacy and electoral, communications and organizing teams bringing Jewish values and a Jewish voice to the fight for social justice in the United States. Previously, Ginna was Managing Director of the Democracy Collaborative at ReThink Media. There she led the team focused on building the communications capacity of advocates working to reducing the power of big money in politics, ensure fair and diverse courts, and protect and expand voting rights. Prior to ReThink, she managed communications for the California office and for small-dollar loans at the Center for Responsible Lending, and served as director of public relations at Full Court Press Communications in Oakland, Calif. She has also worked with The OpEd Project, the SPIN Academy, and AlterNet, and has written for the Los Angeles Times, San Francisco Chronicle, Washington Post, Salon and Newsweek, among others. Ginna is the co-editor of The Paradox of Loyalty: An African-American Response to the War on Terrorism, an alum of Bend the Arc's Jeremiah Fellowship and Selah Leadership Program, a native southerner, and the mother of four terrific kids.