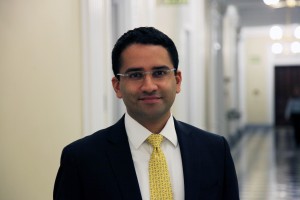 Gautam Raghavan currently serves in the Office of Public Engagement at The White House as the White House’s liaison to the lesbian, gay, bisexual, and transgender (LGBT) community. Prior to joining The White House, Raghavan served as Deputy White House Liaison for the Department of Defense and as Outreach Lead for DoD’s “Don’t Ask, Don’t Tell” Working Group. He has also previously worked for the Democratic National Committee and the Obama campaign in 2008. Raghavan was born in India, raised in Seattle, WA, and attended Stanford University. He now lives in Washington, D.C. with his husband.