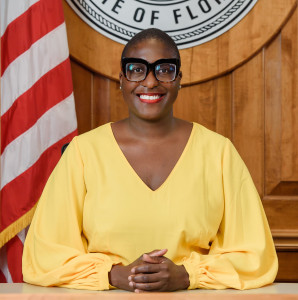 Gail Johnson is a former City Commissioner in Gainesville, Florida, where she was elected at-large in 2018. She is currently a co-founder and organizer at Florida Forward Coalition. As a former policy maker and in her new role, she primarily centers the voices and needs of those most marginalized, in order to be a catalyst for inclusive decision making and systemic change rooted in justice and equity. She graduated with a Bachelor of Arts from the University of Florida with a degree in English literature. Her previous career included founding and publishing an arts and culture magazine in Brooklyn, NY, and working at the feminist publication, BUST magazine. She is on the board of Planned Parenthood of South, East and North Florida, co-chair of the governance committee at PPSENFL, a member of Local Progress and a founding member of the Local Progress Florida Organizing Committee. She is the former chair of the Race and Equity Subcommittee at the City of Gainesville, and served on several committees for the National League of Cities, including the Race, Equity and Leadership Council, Women in Municipal Government and the Black Caucus. She is passionate about social justice, food justice, carceral injustice and reproductive justice. She supports efforts for achieving racial and gender equity, both in city government and the community at large. From insight to implementation and every step in between, Johnson thrives in unfamiliar territory with the intention of improving the collective experience. When she isn't spending her time at meetings, community events, talking with community members or researching policy, she is raising a brilliant tween who dabbles in the performing arts and sports.