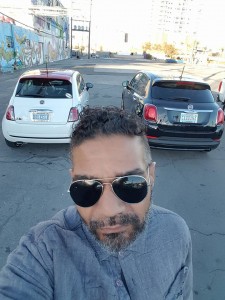 Derek Washington became an activist when he asked Robin McGehee during a radio interview, "Where are the Black people in the National Equality March?" She put him on the spot and said, "you're in charge of finding them, including them and while you're there, make sure all groups not traditionally included are included." I am Derek Washington and that one question led to my having 24 subcommittees and meeting many of the folks who have gone on to be LGBTQ leaders across the country today. I went on to become a central figure in the fight to repeal DADT and am known for "flipping" Nevada Senator, John Ensign, a staunch opponent on the subject to our side. I helped Senator Reid in his re-election efforts and went on to be the only Black ever to serve as Stonewall of Southern Nevada and Nevada State Stonewall. In addition to being the Nevada State Lead of Get EQUALNV I am the only Gay person to ever head a Black Democratic organization in Nevada, the Black Democratic Empowerment Project. I was honored to be chosen as one of the OUT 100 for 2016 and currently am experimenting with using various platforms such as Facebook LIVE to get the word our about current Black Thought through my online show, #TalkingWhileBlack.