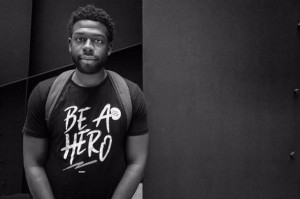 Darius Khalil Gordon is the new National Field Organizer for the Center for Popular Democracy. Part of the Fight Back initiative, Darius plans on bringing his energy and years of experience as a lead organizer for Citizen Action of New York and National Organizer for the Gathering for Justice to the table. Darius first came to New York to serve as African American and Youth director for a State Assembly campaign. When the campaign ended, he began work with the Working Families Canvassing and Fundraising team where he expanded his knowledge and practical skills for electoral and social justice work. In early 2014, Darius started as a community organizer for Citizen Action of New York, working on and winning campaigns such as Fight for $15, paid sick leave, and paid family leave .He has also has victories in the criminal justice field being a member of the Justice League NYC, where they helped get Raise the Age legislation passed in New York state, making now illegal to house 16 and 17 year olds in adult jail and prison facilities.He is a Washington D.C native who studied African and African American studies at Penn State University.