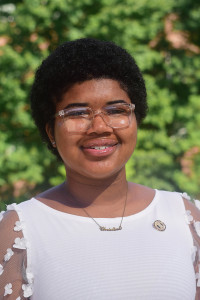 Christina B. Williams is a Philadelphia, PA native and a senior at Clark Atlanta University where she is currently pursuing a Bachelor of Arts in Political Science as a Provost Academic Excellence and Dean's List scholar. She is a leader in the student civic engagement space and has extensive experience serving in various elected student government positions as well as founding and presiding over several campus clubs and initiatives, including CAU Votes. Christina has gained experience through fellowships and internships with several nationally recognized civic organizations including the ACLU of Georgia, the Andrew Goodman Foundation, Campus Vote Project, Common Cause, IGNITE National, Public Citizen, and Rock the Vote. She has also been highlighted by a number of media outlets including The National Journal, NPR, and The Washington Post. Christina aspires to attend law school following her undergraduate studies in order to become an attorney and utilize the law as a tool to defend the civil rights & civil liberties of marginalized communities.