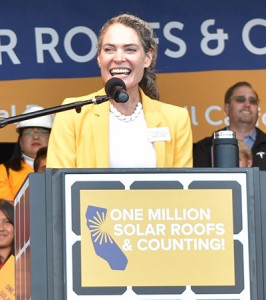 Bernadette Del Chiaro has been organizing and advocating for clean energy and climate change solutions for three decades. Woven throughout her career is a passion for making concrete, long-lasting change in how we power our lives and communities and a belief in the effectiveness of organizing around policy changes. Bernadette has served as the Executive Director of the California Solar & Storage Association (CALSSA) for nine years. CALSSA is California’s oldest and largest clean energy business group with over 700 members that employ over 50,000 workers. Prior to CALSSA, she was the Director of Clean Energy and Global Warming Programs at Environment California, a citizen-funded environmental advocacy group, and the Western States Regional Director for Environment America. During her career with Environment California, Ms. Del Chiaro was a leading voice on several clean energy initiatives including the Million Solar Roofs Initiative (SB 1) and the resulting California Solar Initiative. Prior to her work in California, Del Chiaro was the Organizing Director at the Toxics Action Center (now Community Action Works) where she provided technical and organizing support to neighborhood groups facing local environmental threats. She is a 1998 graduate of Green Corps, the field school for environmental organizing, and has run several canvassing operations for the Fund for Public Interest and MoveOn.org. Bernadette has also spent time working with Greenpeace where she partnered with the Fort Mohave Indian Tribe in Needles, CA, to stop the proposed Ward Valley radioactive waste dump in the 1990s. She's authored several clean energy reports and has been quoted widely in the media including MSNBC, NPR, BBC, New York Times, Los Angeles Times. Bernadette is a California native and a graduate of the University of California at Berkeley. She lives in Sacramento with her husband and two children.