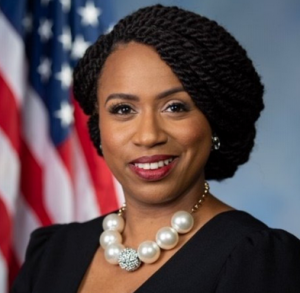 Ayanna Pressley is an advocate, a policy-maker, an activist, and a survivor. On November 6, 2018, Ayanna was elected to represent Massachusetts’ 7th Congressional District in the U.S. House of Representatives, making her the first woman of color to be elected to Congress from the Commonwealth of Massachusetts. Ayanna believes that the people closest to the pain should be closest to the power and that a diversity of voices in the political process is essential to making policies that benefit more Americans. Born in Cincinnati and raised in Chicago, Ayanna is the only child of a single mother and a father who was in and out of the criminal justice system. Ayanna’s mother, Sandra Pressley, was a tenants’ rights organizer who instilled in her the value of civic engagement. Thanks in large part to her mother’s dedication to activism, Ayanna has always been acutely aware of the role that government can play in lifting up families and communities. Ayanna moved to Boston, MA in 1992 to attend Boston University. Before she was able to complete her degree, she withdrew from the University to help support her mother. Working as an aide to Congressman Joseph P. Kennedy II and later Senator John Kerry, Ayanna’s professional life mirrored her commitment to service and lifting the voices of those in her community. In 2009, she launched a historic at-large campaign for Boston City Council and won, becoming the first woman of color elected to the Council in its 100-year history. On the Council, Congresswoman Pressley worked in partnership with residents, advocates, and other elected officials to combat the inequities and disparities facing the community. In 2016, Congresswoman Pressley was named one of The New York Times 14 Young Democrats to Watch. In 2014, the Greater Boston Chamber of Commerce named her as one of their Ten Outstanding Young Leaders, and the Victim Rights Law Center presented her with their Leadership Award. In 2015, she earned the EMILY’s List Rising Star Award and was named one of Boston Magazine’s 50 Most Powerful People. She is also an Aspen-Rodel Fellow in Public Leadership, Class of 2012. Ayanna lives in the Hyde Park neighborhood of Boston with her husband Conan Harris, ten-year-old stepdaughter Cora, and cat Sojourner Truth.