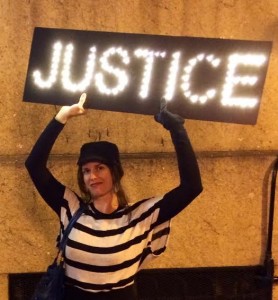 Athena Soules became involved in activism in 2011 at the beginning of Occupy Wall Street, when she created the black and white Occupy banner that defined the space of virtually every Occupy action and was used at the front of nearly every march. In 2013, she cofounded the NYC Light Brigade and has since organized and led dozens of actions. The NYC Light Brigade has shed light on a broad range of social-justice issues, including tax evading corporations, the NSA, the People’s Climate March, the Black Lives Matter movement and participated in various rallies and vigils for specific victims of police violence. NYC-LB has frequently collaborated with The Illuminator Collective, and participated in artist Ai Weiwei’s twitter campaign #FreeExpression, with an action outside the Brooklyn Museum during the opening of his exhibition, “According to What”. Using bold banners and lighted signs, Athena fights for justice both day and night.