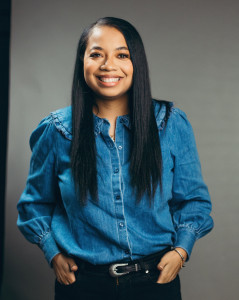 Ashley Robinson is an accomplished political operative and strategist whose work is focused on developing sustainable progressive political infrastructures and long-term power building strategies to ensure the protection, authentic engagement and respect of America’s most impacted communities. Ashley serves as Executive Director of Progress Georgia, a key progressive communications and research hub that works to uplift the values and voices of the progressive movement across Georgia and increase public awareness about Georgia’s progressive priorities. Prior to serving in this role, Ashley served as the Deputy State Director for America Votes Georgia where she led successful state legislative strategy, advocacy and collaborative efforts for 60+ state-based and national 501(c)(4) organizations, as well as the seamless coordination, data servicing, budgeting and electoral programming for partners alongside America Votes Georgia’s State Director. Months into officially joining the America Votes network, the Georgia team and its partners helped shepherd unprecedented electoral victories in Georgia’s 2020 election cycle that flipped the political landscape of Georgia with a Presidential win and picking up two US Senate seats. Prior to this work, Ashley served as Chief of Staff to former House Minority Leader Stacey Abrams and Caucus Director for the Georgia House Democratic Caucus (GHDC) where she oversaw the integral operations of the Minority office supervising legislative affairs, communications, constituent service, data, field, and fundraising departments overseeing 5 election cycles and 7 legislative sessions. Under Ashley’s leadership, the GHDC was responsible for preventing a Republican supermajority in 2012 and have continued to pick up competitive seats since. Ashley also served as the liaison between state and national organizations, external lobby groups and the Minority Leader while managing partnerships with donors, allies and surrogates. During the 2018 campaign cycle, Ashley served as Political Director through the Democratic Party of Georgia’s Coordinated Campaign to Stacey Abrams’ gubernatorial bid in Georgia. Under Ashley’s leadership and vision, she effectively built a team of a dozen constituency programs and leaders whose unique organizing strategies effectively increased Georgia’s voter turnout with key constituencies of color. Ashley is an avid student of leadership and community empowerment having graduated from Georgia State University’s Andrew Young School of Policy Studies Legislative Health Management Institute and Legislative Staff Management Institute at University of Southern California with the National Council of State Legislatures. Most recently, Ashley was named a Fannie Lou Hamer 2020 Fellow with Sandler Phillips Center. Ashley is a graduate of Spelman College, where she received a Bachelor of Arts in Psychology. Ashley enjoys dancing, collecting art, traveling and mentoring young women of color who are interested in building their political prowess.