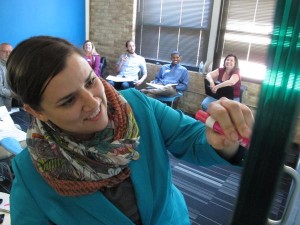 Born and raised in rural Arizona, Ashley is the National Training Director with Organizing for Action, a grassroots organization dedicated to promoting a progressive national agenda. Prior to joining the OFA team in January 2013, Ashley spent four years serving President Obama's grassroots team in a number of capacities: as an Organizing Fellow and Field Organizer on his 2008 campaign, as a Regional Field Director focused on passing health care reform in 2009, as a Field Director focused on reelecting his allies in the 2010 midterm election, and as Florida's Training Director for his reelection campaign in 2011 and 2012. Ashley lives in Chicago where she also teaches a course on Issue Advocacy and Community Organizing at the University of Chicago Harris School of Public Policy. She enjoys biking, hiking, spending time with family and friends, and getting outside with her dog, Steve.