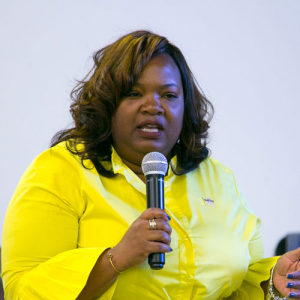 April Verrett serves as President of Service Employees International Union (SEIU), Local 2015 – California’s largest union, and the nation’s largest long term care union, representing over 400,000 home care and nursing home workers throughout California. Although now based in Los Angeles, April’s story begins proudly on the South Side of Chicago. Raised by her grandmother, who worked as a locker room attendant for the Chicago Park District, herself a union steward for SEIU Local 46, April learned early on the values of perseverance, collective action, and community. April also leads nationally for SEIU International. She is an International Vice President, chairs the union’s National Home Care Council, co-chairs the National Organizing Committee and is a member of the Finance Committee. She has been tapped twice by Governor Newsom to serve. First in 2019 to serve on the Alzheimer’s Prevention and Preparedness Task Force which is tasked with developing a plan to address and manage Alzheimer’s disease and other aging-related conditions throughout California. Again in 2020 he selected her for his Taskforce on Business and Jobs Recovery. April’s work on the Taskforce is helping to reopen the fifth largest economy in the world post COVID-19 and ensure that the needs of all working families are front and center in the process of rebuilding our economy equitably. April is committed to dismantling structural racism by providing equity to individuals and communities of color. April has continued to demand equity through her work with several organizations who share this vision and by elevating the voices and first hand accounts of the impact that racial inequities have had during the pandemic on Local 2015 members. April is also a member of the Committee for Greater LA, a coalition of diverse leaders who came together to understand the impact of COVID-19 on different populations. As a labor leader and activist, April has spent most of her career helping workers form unions to ensure that their voices are heard and respected. April is a tireless advocate for working people, driven by the belief that “unions give workers a platform to fight for more than wages, benefits and working conditions, but also around everything that matters in our members’ lives and their communities.”