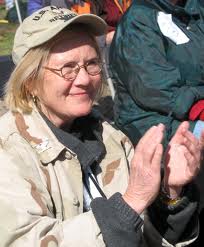 (Ret.) Colonel Ann Wright, MA, LL.D, spent thirteen years active duty in the U.S. Army and sixteen additional years in the Army Reserves, retiring as a Colonel. She is airborne-qualified. In 1987, Colonel Wright joined the Foreign Service and served as U.S. Deputy Ambassador in Sierra Leone, Micronesia, Afghanistan, and Mongolia. She was on the first State Department team to go to Afghanistan and helped reopen the Embassy there in December 2001. Her other overseas assignments include Somalia, Kyrgyzstan, Grenada, Micronesia, and Nicaragua. On March 19, 2003, the eve of the U.S. invasion of Iraq, Ann Wright cabled a letter of resignation to Secretary of State Colin Powell, stating that without the authorization of the UN Security Council, the invasion would be a violation of international law. Since then, she has been writing and speaking out for peace and MST.