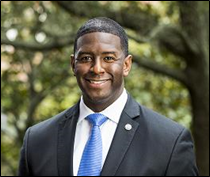 With a passion for public service, and the ability to motivate and mobilize people to action, Mayor Andrew D. Gillum is recognized as a transformative statewide and national leader. At the age of 23, Gillum, while still a student at Florida A&M University (FAMU) majoring in political science, became the youngest person ever elected to the Tallahassee City Commission. He was then re-elected to serve for a full four-year term, and was subsequently re-elected in 2008 and August 2012. During his 12 years of service on the City Commission, Mayor Gillum played a leadership role in countless community initiatives and decisions that have helped improve the community’s overall quality of life, as well as ignited the economic vitality of the City. It was this steadfast leadership that led Gillum to be elected Mayor in 2014 with 76% of the vote in a three way race. Since taking office, he has launched numerous initiatives related to investing in early childhood education, advancing the production of clean and renewable energy, growing entrepreneurship and innovation, and creating economic opportunities for those in the most challenging circumstances. Under his leadership, the City of Tallahassee outpaced the state of Florida in job growth, and has achieved accolades such as the best place in Florida to start a business, a top 30 City for entrepreneurs in America, and an Obama White House TechHire community. In January of 2017, Mayor Gillum launched the Campaign to Defend Local Solutions, an effort to build awareness and educate on the spread of preemption occurring across the country, and to help local officials fight back to protect local values. Mayor Gillum resides in Tallahassee, Florida with his wife, R. Jai, and their three children Caroline, Jackson, and new baby Davis.