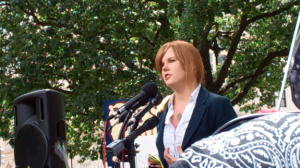 Amie Stepanovich is Senior Policy Counsel at Access. Amie is an expert in domestic surveillance, cybersecurity, and privacy law. At Access, Amie leads projects on digital due process and responds to threats at the intersection of human rights and communications surveillance. Previously, Ms. Stepanovich was the Director of the Domestic Surveillance Project at the Electronic Privacy Information Center, where she testified in hearings in both the Senate and the House of Representatives, as well as in State legislatures. She is serving as co-chair for the forthcoming 2014 Computers, Freedom, and Privacy Conference. Amie was named as a Privacy Ambassador by the Information and Privacy Commissioner of Ontario, Canada and was recently recognized as one of Forbes magazine’s 30 under 30 leaders in Law and Policy. Stepanovich has a J.D. from New York Law School, and a B.S. from the Florida State University.