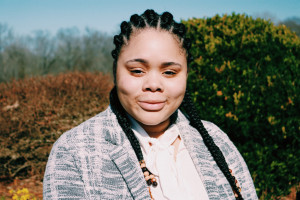 Allyson Smith (She/They) is a youth activist, poet, and all-around creative from Memphis, TN. Currently attending Howard University with a major in Political Science, she is carrying that legacy of changemakers and visionaries over to the Memphis community in various ways of serving. Allyson is heavily involved with politics, with a strong emphasis on acknowledging Southern Black Women in the artistic and political sphere. She says no to the status quo and is using her voice as a stepping stone to an equal society. Allyson does this by uplifting and working for Black women who understand and see her. She has been an avid supporter and intern for Shelby County Commissioner, Tami Sawyer and has also completed her internship at Impact Strategies, a political strategist firm headed by CNN analyst, Angela Rye. Through her work, which has been featured in Teen Vogue, Buzzfeed News, The Commercial Appeal, WMC Action News 5, and The Guardian, she is authentically herself and does not shy away from topics that spark hard conversations. Allyson believes that her future is one that is free of limitations and societal normalities, and she will do everything in her power to make it so.