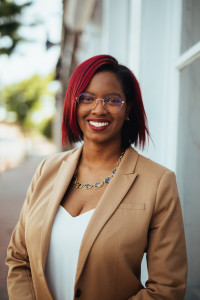 Alexsis Rodgers is Organizing Director at the National Domestic Workers Alliance and Care in Action, managing the civic engagement and political programs in Arizona, Georgia, Michigan, Nevada, North Carolina, South Carolina, and Virginia. Recently, she led passage of the first Southern Domestic Workers Bill of Rights as Virginia State Director. Before joining Care in Action and NDWA, she played a key role in achieving Medicaid Expansion and increasing birth control access as Communications Director for Planned Parenthood Advocates of Virginia and Virginia League for Planned Parenthood. In 2020, Alexsis ran for mayor of Richmond, Virginia. She volunteers as 4th Congressional District Chair for the Democratic Party of Virginia and previously served as President of Virginia Young Democrats. She is an alumna and former board chair of Emerge Virginia, a candidate training program for Democratic women. Alexsis earned undergraduate degrees in Mass Communications and Spanish at Virginia Commonwealth University. She and her partner live in Richmond with their dog and cat.