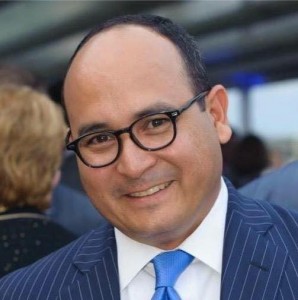 Albert Morales is Senior Political Director at Latino Decisions and based in Washington DC. His years of experience working as a senior official with the Democratic National Committee spans three different DNC Chairs, and one stint with the Democratic Governors’ Association. In the run up to the 2016 Presidential Primaries, Morales served as Director of Hispanic Engagement and Deputy Director of the party’s overall engagement efforts. During Governor Howard Dean’s tenure at the DNC, Morales spearheaded the party’s 50 State Strategy aimed at Hispanic voters. As Chairman Dean’s Director of Hispanic Engagement, he developed and managed the implementation of new models for how the DNC interacts with the Hispanic electorate in the lead up to the 2008 Democratic Presidential Primary Election. Also at the DNC, Morales served as Regional Political Director for the Committee’s 2000 Redistricting Project. In this role, he developed a political strategy to work with state parties to promote favorable redistricting plans. He also worked with house and senate caucuses in state legislatures advocating for consensus on redistricting maps. In between tenures with the DNC, Morales worked for the Democratic Governors Association as Federal Liaison and Policy Advisor to DGA Chairman Governor Bill Richardson. Morales advised the Governor on policy, and supported the efforts of Democratic Governors with regard to fundraising and strategic campaign initiatives. He also served as DGA liaison to Democratic Governors in the Hall of States and the National Governors Association In addition to working within the political machinery of DC, Albert also has worked with and for business interests. Most recently he served as Vice President of Government Affairs for the United States Hispanic Chamber of Commerce (USHCC) where he led the Chambers’ government relations on Capitol Hill, the administration and its membership across the country. In this capacity, Morales worked in concert with high profile corporate brands in promoting policies that would benefit Latino owned businesses. He also championed the Chamber’s first presidential endorsement process and participation in both the Republican and Democratic Presidential Primaries. Following the 2010 election, Albert formed Albert Morales Strategies, LLC where he focused on business development efforts with technology firms seeking to enter the government affairs and public opinion space. Mr. Morales also served as a Vice President for Cassidy & Associates. In this role he represented companies from some of the country’s leading energy and financial services sectors with business before the federal government. Mr. Morales was an early adopter of social media and can be followed at @al_morales. A native of Fort Worth, Texas, he now resides in Maryland with his wife Amelia, daughter Martha and several household pets.