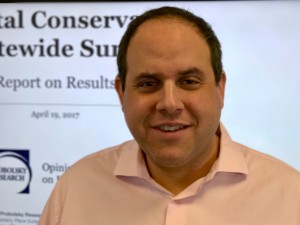 Adam Probolsky is president of Probolsky Research; a women-owned, Latina-owned, full-service market and opinion research firm working on behalf of corporate, government, labor, non-profit, political, and other special interest clients. Adam has acted as pollster and strategic advisor on hundreds of successful crisis communications and public affairs projects, local, special district, county and statewide initiatives and candidate campaigns as well as public education and outreach and efforts. Additionally, Adam has been a key advisor to the firm’s clients on matters of public policy, legislation and business strategy. Adam was both a planning and finance commissioner for the City of Irvine where he oversaw and approved billions of dollars in private development and public infrastructure projects. As a past chairman of the Irvine Valley College Foundation, he has overseen the fundraising and the award of hundreds of thousands of dollars in scholarships to students and funding for college police. He was also a member of the Orange County Waste & Recycling Commission where he oversaw landfills, recycling programs, waste hauling companies and power generating facilities. As a member of the Orange County Transportation Authority’s Environmental Mitigation and Oversight Committee, he oversaw the expenditure of over $175 million dollars in public transportation funds. Adam has been published and quoted numerous times in publications such as the Los Angeles Times, New York Times, Orange County Register, Politico and Riverside Press Enterprise. Additionally, he has been a panelist on news and public affairs television programs such as the Inside SoCal on PBS, KTLA Channel 5 Morning Show and the One America News Network (OAN). Adam wrote a weekly column for the Orange County Register for four years. He previously served as a board member and development committee chairman for Jewish Family Service of Orange County, a non-profit organization that serves families in need, and volunteered for nearly eight years with the Orange County Sheriff’s Department as a spokesperson. Adam formerly served as a member of the Policy Committee on Energy and the Environment of the United States Chamber of Commerce. He is an alum of the U.S. State Department funded American Council of Young Political Leaders with which he traveled to El Salvador and Nicaragua. He has also traveled to Taipei and Qatar with U.S. Congressional leadership and to Havana in 2007 as part of a people-to-people exchange. Probolsky is a New Jersey native who has lived in Irvine, California for twenty-five years. He is married with three children.