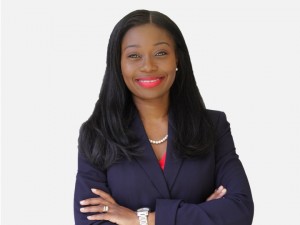 Abena McAllister is the Executive Director of Women of Action MD, and the Deputy Secretary of the Maryland Democratic Party. Abena is a New York native, and lifelong Democrat. Abena has lived in Charles County Maryland for more than 11 years with her Husband and college sweetheart Willie, a native of the area. Abena earned her Bachelors degree with cum laude honors from Nyack College in 2007, and earned her Juris Doctorate from the David A. Clarke School of Law in 2013. Abena is no stranger to community advocacy or representing the ideals of the Democratic Party. In 2013, Abena drafted the Cardiopulmonary Resuscitation and Automated External Defibrillator Requirements Act of 2013. The Act initiated a CPR and AED program across schools in the District of Columbia, and established procedures for responding to medical emergencies. Her Democratic Party involvement includes service as the youngest Chair and second African American woman to lead the Charles County MD Democratic Party. In an effort to encourage more Democrats to run for office in Charles County, Abena hosted the county’s first candidate training workshop and campaign finance workshop. As Chair, Abena made a commitment to do more fundraising for the party and as a result the Charles County Democratic Central Committee had its highest grossing Truman Kennedy Obama Awards Dinner of all time. Additionally, under her leadership the Charles County Democratic Central Committee’s Get Out The Vote(GOTV) efforts were effective and increased voter turn out by more than 49% in Charles County. As a result Charles County was one of four counties throughout the State that produced a win for Ben Jealous and every Democrat on the ballot in November 2018. Abena has supported dozens of Democratic campaigns at the local, state and national level, including Barak Obama’s 2012 Presidential re-election campaign, Congressman Anthony Brown’s 2014 campaign for Governor of Maryland, and Hillary Clinton’s 2016 presidential campaign to name a few. Abena’s civic involvement is extensive, as she has never been one to sit on the sidelines. When a cause is important, she rolls up her sleeves, joins the team, and does what it takes. In the wake of the growing discontent with Law enforcement in our nation, in December of 2014, Abena organized a countywide panel discussion with several community leaders, local politicians, and the newly elected Sherriff, to discuss community relations, racial tension, policing practices, accountability issues, and how to build a stronger relationship between the Charles County Sheriff’s Department and citizens. In 2017, Abena helped to organize a bus for Charles County residents to attend the Women’s March on Washington. Following the march, Abena founded one of the most progressive organizations in the county, Women of Action Charles County (WOACC). Women of Action Charles County MD (WOACC) is a large diverse network of local women dedicated to empowering and supporting women and all people by mentoring, performing community service and offering educational opportunities to further the common good and general welfare of residents in the community. In 2018, WOACC organized a bus to take residents from the tri-county area to the March for Our Lives. Since it’s inception, WOACC has been featured on Good Morning Washington, hosted a meet and greet with Congressman Steny Hoyer, House majority leader of The United States Congress, held educational town halls, harvested food to feed low-income residents across Maryland, started a teacher supply closet to give teachers around the county free classroom supplies, and raised funds to support Hurricane Harvey relief efforts. In December 2018, Abena was elected Deputy Secretary of the Maryland Democratic Party and serves as the co-Chair of the party’s Ethics and Sexual Harassment Committee. Abena is a hard worker and truly dedicated to serving the community. She attributes her strength and love of service to her faith and family. She currently resides in Waldorf Maryland with her husband Willie, their 3yr old daughter Reagan, and their two dogs.