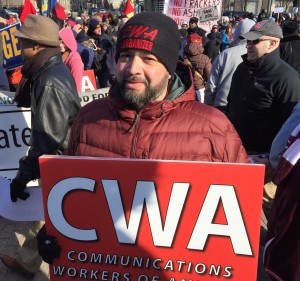 Cesar Leyva was born in the border town of Tijuana, Mexico and moved to San Diego, CA when he was 10 years old. His mother was a single parent working as a fast food worker, working long hours for very little pay while raising two boys. Cesar relocated to North Carolina in 2000 and began working at a telecom company. He joined the union on his first day of work and was able to witness first hand, unprecedented employee equality and the power of workers when they stick together. He quickly became a shop steward and later an officer in his local. He is proud to currently serve as North Carolina Senior Campaign Lead for the Communications Workers of America, where he works to raise the voice of organized labor in the broader social justice movement. His work includes mobilizing CWA members to be activists in North Carolina. Working together through community coalitions and other unions, his focus is on human rights, environmental issues, fair wages and organizing the south, among many others.